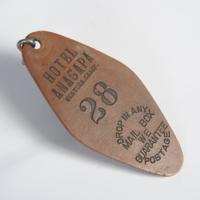 (Tag, Identification) Key tag used at the Anacapa Hotel in downtown Ventura.
The three-story hotel was built in 1889 operated by the Hartman family who ran it until it was razed in 1928. 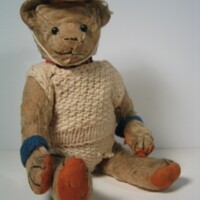 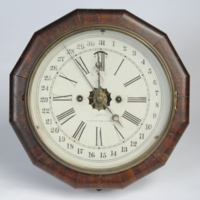 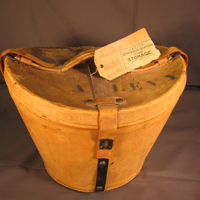 (Hatbox) Leather top hat box; stamped with “A. Levy”; lined with blue and white striped fabric.
Achille Levy came to Ventura County from France in the 1870s. Here he grew his business from agricultural broker at the Port of Hueneme to the largest… 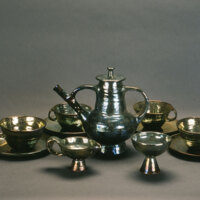 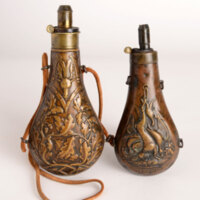 From Gerry Browning’s Docent Textbook: “The black powder of the "Old West" was a very explosive mixture of saltpeter, charcoal and sulfur. People dampened the mixture…

Mortar and Pestle with Cooking Bowl 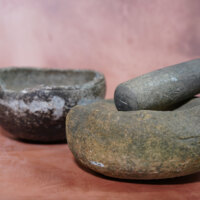 Stone mortar and pestle; rounded on one end; found and taken from Somis. Donated to the Museum.

Metate; round shape with surface… 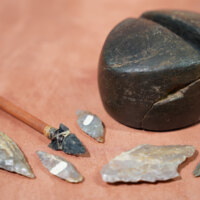 Projectile points; found and taken from San Miguel Island. Donated to the Museum. 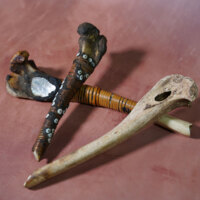 Whistle made from deer tibia with distal end broken off; proximal end has asphaltum over a hole, which shows the imprint of a shell that was once adhered there; found and taken from a cave in Northwest Ventura County. Donated to the Museum. 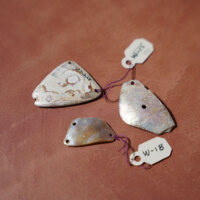 Triangular and trapezoidal abalone shell ornaments; one biconically drilled hole at each corner; some cross-hatching. 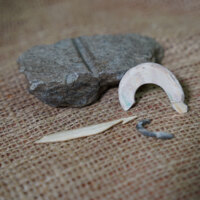 Barb section of a composite fishhook made of bone.

Mussel-shell fishhook; circular with parallel grooved shank; notch runs parallel to the length; rounded and deep on one face; found and taken from Rincon Point in the 1960s. Donated to the… 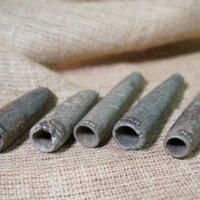 Tubular, gray steatite pipe; one end tapers narrower than the other.

Some pipes found and taken from the Thurmond Ranch in Saticoy; one from Rincon area. Donated to the Museum. 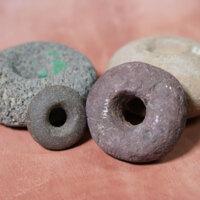 Black porous stone, circular with a hole in center. 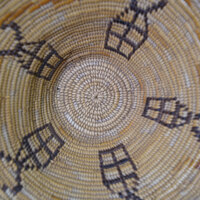 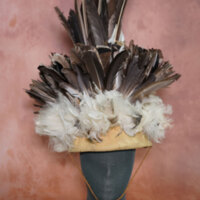 Replica of a Chumash feather headdress or cux; deerskin skull cap on a frame of twigs, with chinstraps made of milkweed cordage; bottom row is white turkey feathers, second row of medium length gray feather; top has a bundle or topknot of tall…
View all 15 items